How was your week? Mine has been great, I went shopping twice!! The first time was on Monday cause I had to go to the doctor and it was quite far from my school so I didn’t go in all day. But it was close to the mall so, I mean, I had to go!

And because it’s sales, I bought some really cool stuff there! Also, I haven’t made any shopping haul in AGES so I thought it was time, dontcha think?

Also, this is the first time I’m doing a shopping haul taking pictures of myself. Of course, I don’t show my face, but I decided I could use my posing skills on this blog. *just kidding, still working on that* 😅

So the first thing I’m gonna show you is this shirt I’m completely obsessed with!! Ok so I like shirts and one day I realized I didn’t have the classic one with blue stripes. I saw this one and I just fell in love! 😍😍

It was not only what I wanted but it also had this thing on the sides, I’m sorry I don’t know how to call it, but it’s so cool!!! I’ve been wanting it since a long time ago but it was kinda expensive so I had to wait till sales. I also bought some dark blue pants. They’re formal pants but not formal like a pant suit, you know? It’s like both, I don’t know.

I thought they looked great together so I’m gonna show them in the same picture.

The next thing I bought are these light shoes that are so trendy right now! I’ve been wanting to have some for SO LONG!! They’re just so cool!! They also have a silver front and I don’t know if you can tell but they have like snake print. I’m not a fan of animal print *and by that, I mean I hate it* but I like that it’s white and very discreet, also; it makes them different and they were ON SALE!!

Sorry I’m not showing the shoes with the light on, I forgot to charge them. 😅😅 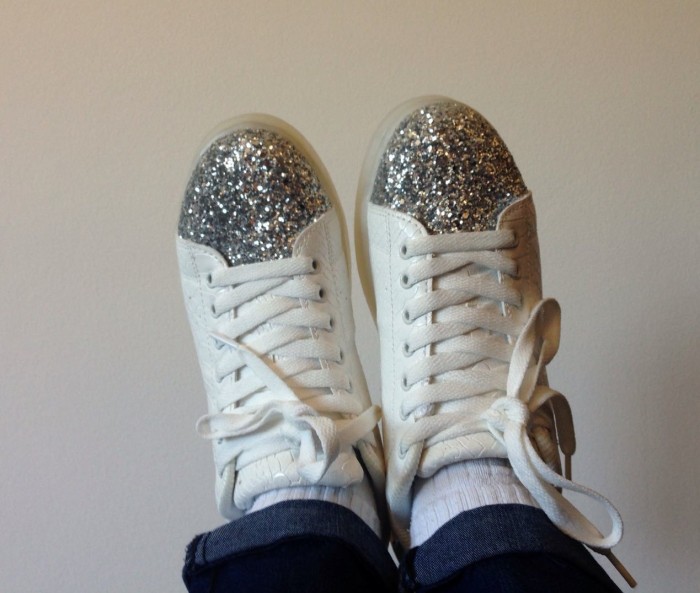 When I was about 8, I had a dark blue shirt with little white spots, it was really cute. Well, it was more like a blouse, anyways.. I wanted to have something like that again cause it looks really good! Then, I saw this shirt. It’s just what I wanted and also, it’s not exactly the same cause it’s black so, yeah 😊

I like black cause you can wear it with crazy colors! That’s why I put it on with some pink pants for the picture. The pants aren’t new.

I also bought another pair of shoes. As I said earlier about the striped shirt, I’ve been wanting to have these shoes for really long but they were kinda expensive so I had to wait till sales. I just love the color, it’s really pretty! I’m in love with the tied bow, if I can call it that? I don’t know, they’re just so cool!!! 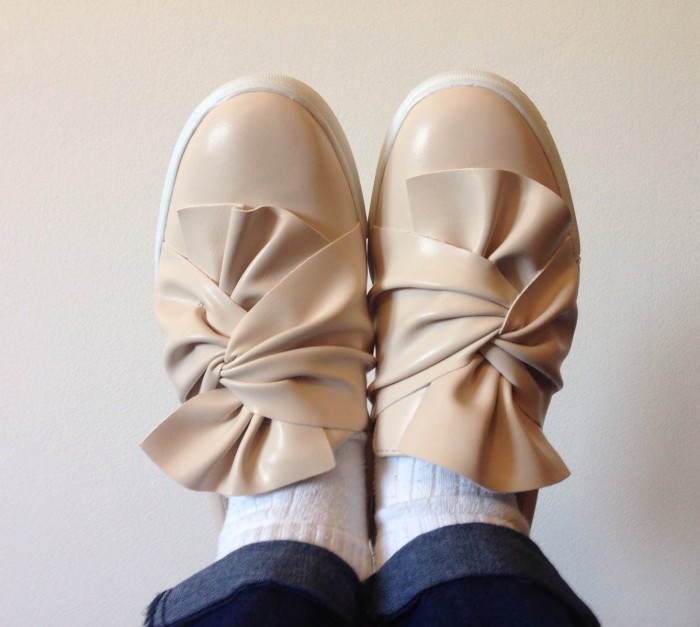 And the last things I bought were 1. this really cute dark blue shirt with the beige pattern and 2. these beig trousers that match PERFECTLY with it. The shirt is adorable, and anyone could wear it! I mean, a man could also pull off that pattern. Also, it’s perfect for kids too!

Well, I actually bought it in the kids section, hehe 😛

And that was a wrap on the shopping haul. And yes, I know I bought a lot, don’t make me feel even worse!! 😭 I think I might have a problem, but meh, I don’t care!

Please lemme know what you think of the clothes in the comments!! I’d love to hear what you think. What are some items of clothing you’ve been obsessed with lately? Have you bought anything during these sales? If yes, what?

I hope you liked this post as much as I liked making it! I also loved being in the pictures because I think shopping hauls need people to actually wear the clothes so you can see them better. I hope to be making more of these soon. I hope you have an awesome day!