Hope you’re all having a great day, cause after this post it’s gonna be a bad one. Just kidding! So in today’s post I’m doing something I haven’t done is CENTURIES and that is a movie review.

Yas, most of you may not know it *none of you know it* , but I actually did a movie review once on this blog. It was about 2 years and something ago. Click here to check it out, if you want. 😅 *if you do check it out, I’m sorry if my English was bad or if I made a lot of mistakes*

So as some of you may know, on Halloween, me and my friends went to the movie theater to watch this movie and they told me it wasn’t gonna be scary but it turned out to scary the eff out of me. 😂😂 I wasn’t the only one who got scared though, other 2 of my friends were like: WT* was that?

Anyways, let’s move on to the review:

*I’ve always wanted to say that* 😆 I’m gonna make A LOT of spolers, lots of them, I’m basically gonna tell you EVERYTHING. I didn’t actually wanna do this at first but this movie’s plot is very complicated and it has so many hard things to understand (and obviously explain) so I decided to just say it all.

Sorry. Don’t read this if you wanna watch the movie sometime. 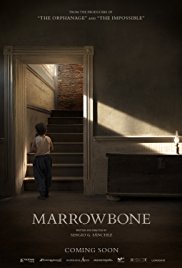 So it’s basically this really cute and nice family: a mother with 4 children, two of them boys, a girl and a little boy and a dad.

And because he’s effing cray, the mother and the kids go to America to the mum’s old house and they adopt their mum’s maiden name; Marrowbone. She dies and the eldest guy bascially is in charge of the situation.

THE DAD FINDS THEM!

And in this part is when things get REAL messed up. 💁 The dad wants to recover some money the mom stole him. The eldest gives it to him but as the man was a murderer and blah blah and the same eldest kid *I should call ’em by the names*, Jack, accused him. 😱

So here some battle thing happens, and the dad leaves Jack unconscious and the basically kills the siblings. Jack locks his dad in the attic till he dies, and because Jack’s schizophrenic (for real) he acts like his siblings are still alive. 😱 I think THAT was the scariest part.

Apparently, the house is not theirs yet but they have no money apart from some bills they stole their dad (an that’s why he found them before).

LONG STORY SHORT: The kids (he, cause dey all dead) grabs the money, the “ghost gets mad”, he returns it, needs it again and grabs it risking his life SO EFFING BAD and I’mma tell you why.

He had been surviving from eating lil’ animals like rats and drinking the water from the rain (which he could get cause the chimney was there. Or was it just a whole on the roof? IDK 😅😅

Anyway, so Jack gets hurt REAL bad, like, he had an effing BIG wound in his abs I think.

Some time later, a really good friend he had (and before, they had) goes to his house and finds out he’s effing crazy and finds out the dad is alive so she goes upstairs with the dad. Yes, to the attic. He’s about to kill her but Jack shoots him with a shotgun.

So problem solved. Jack and the girl live together in the house and she helps him cope with his mental illness. The doctor gives him pills so he doesn’t imagine his siblings going around the house like nothing’s going on. 😂

I skipped a lot of things in the story but I told you the main plot.

I didn’t HATE it but I don’t like scary movies because they SCARY!! So yeah, I actually don’t hate the story, I like the fact that nothing is expected and there were many twists, but they were scary.

Did I like the end? I liked that the dad died, but he should’ve died from the beginning so the other kids don’t die we all live happily ever after and I wouldn’t have been scared AF. 😭 Why movie directors?!

I appreciate the fact that there were no ghosts more monsters nor scary dolls. But maybe that would’ve been less scary than this. Specially cause this could happen in real life. Uhuh.

I give it 4 stars, I like the movie, but I removed one cause it scared me, but not as much as I expected. I didn’t get as bad sleep as I thought. Now I’m sleeping totally normally, but yeah.

I feel like no one is going to read this cause no one likes spoilers. 😅

Thanks so much to Bella @ TotallyRandom *follow her blawg, it’s so cool and she’s super funny* for recommending me to make this review!! Sorry Bella, hope you didn’t mind the spoilers. 😅😅

Btw I recently made a video where I played Roblox horror games, especially this game called The Mimic Book 2. Hope you enjoy :3

I hope you liked this post in spite of the spoilers and the lame opinion. I had fun making this! Maybe I’ll make a better one someday. I hope you guys have an amazing day/night and ‘ll see you next week!!