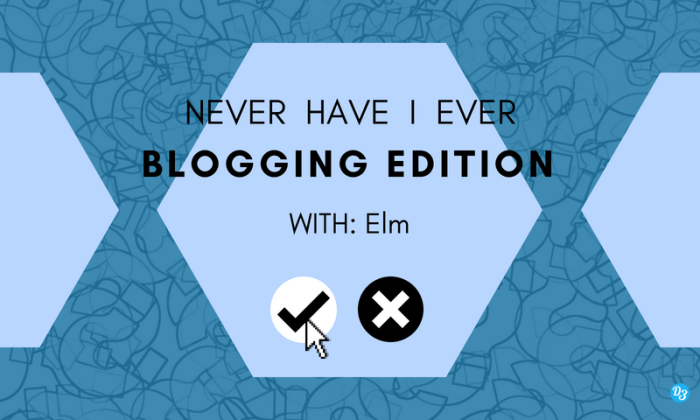 How are you doing? Hope life is treating you well. So it hasn’t been really long, but I just remembered it was time to do more Never Have I Ever’s cause who doesn’t like it hehe

Maybe a lot of people do. BUT NOT US!!

So today I am more than happy to announce that ELM is my guest today!!!!!! *claps and cheers and peeps go crazay*

As always, the RULES are that she’s gonna be answering my Never Have I Ever questions by saying NEVER or HAVE and she’s gonna give an explanation to some of them of why or why she didn’t do those things.

Never Have I Ever Blogging Edition with Elm:

Never have I ever…

I’ve got a few weird or confusing comments that I just have no idea how to respond to, so I don’t in case I accidentally misinterpret everything and panic.

But not recently; I sometimes like posts so that I can go back to them and forget, which is terrible. Now, I take time reading posts – when I have the time – and only after reading do I like it.

There’s always the worry that I’ll miss out a crucial detail of the post. A couple of times, I haven’t finished reading a post if I’ve been too tired but I always try to read posts before commenting.

I’ve never disliked a blogger’s content that much and even if I did, writing a hate comment is just such a horrible thing to do.

Dissed a family member on your blog

Too many times. It’s one of the only ways I can get my feelings out about my family, of which I have a lot.

Except as a joke with the bloggers who have become my good friends. Actually insulting a blogger is, I think, unneeded and rude. If you’ve got a problem with a blogger, tell them rather than being public about what you feel they’ve done before they’ve given you a chance to explain.

Dissed a friend on your blog

I think I’m most shamed of that, as most often, what I wrote about them was petty and completely unfounded. However, as I’ve grown older, I’ve come to realise that respectfully talking about situations is far better than simply raging.

If I follow someone without looking at their content, then I look at it and it’s not something I’m interested in, I’ll unfollow them. Followers being interested in what you write is more important than having loads of followers who aren’t.

Promoted your blog on other blogs in the comments

But only if my post is relevant to theirs. To be honest, I’ve barely done it but I don’t consider it a bad thing, unless you’re spamming or it’s totally irrelevant.

Sometimes I accidentally publish posts that aren’t finished or proofread and I have to do a panic-delete.

Sometimes I’ve commented really confusing things but there wouldn’t be much point in deleting those.

There was one comment I once received that was just not great and I had to delete it.

Not done a tag/award you were tagged for

It’s actually quite embarrassing how many I haven’t done. If I’m really interested in doing answers to the tag, I’ll put an enormous amount of effort into doing that but too often (when I actually got nominated for tags because I wasn’t when I didn’t do them as much), I’d forget which tag was which.

Only a couple of times. I often avoid reading posts with really confrontational titles but there are some posts that surprise me and I get halfway through and realise that something about it doesn’t sit well with me.

Actually. I should have at some point because my password is really complicated.

Luckily, my blog address is short so it’s doubtful I could forget it.

But not for years. If I ever did, it wasn’t because genuinely forgot their name, it was because I had a temporary brain confusion.

But because I use speech software on my computer, anyone who found it wouldn’t even be able to read it.

Which I wish I could overcome. It’s never been a serious envy – usually I’d be envious over how professional people seem. But really, no blogger – especially including me – is perfect.

You got a lot of HAVEs, that’s so cool, no one really has had that many, I really appreciate that people like being honest and don’t care how many they’ve done hehe, it’s just a game right? CONGRATULATIONS!!!! The one person who’s really close to your score is Sari Sari, with 5 NEVERs and 15 HAVEs.

If you wanna read the post where I played Never Have I Ever Blogging Edition, click here!

IF YOU ALSO WANNA BE ON THIS  BLOG PLAYING THE GAME, JUST LEMME KNOW!

Have you ever played Never Have I Ever? Have you ever done any of these things? Have ya not? Would you like to play this game on  my blog?? Tell me erryting!

I hope you liked this post as much as me and Elm liked making it, it was really fun! Thanks so much Elm for taking part in this!!! We hope you have a great day and a great next week!

20 thoughts on “Never Have I Ever Blogging Edition | with Elm!!!”