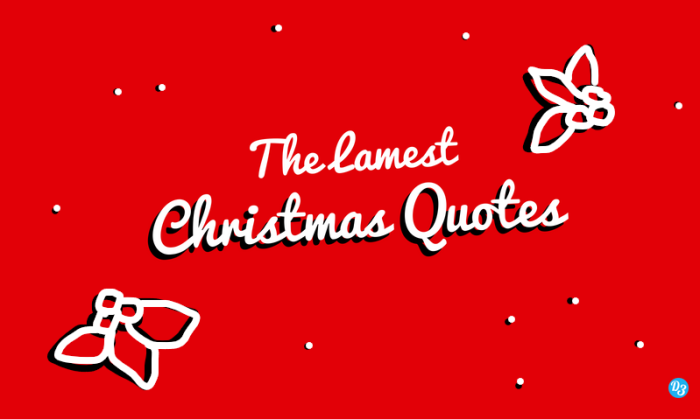 I hope you’re having a great blogmas so far!!! Remember when I shared some quotes I considered lame about love and stuff last St. Valentines? Yeah me neither. I’m gonna do that now!

I love Christmas and everything so I’d never try to diss it or anything, I just thought as I did “lamest love quotes” for Valentines Day, maybe I could share “lame Christmas quotes” today, right? So…

This post is merely written to entertain people and, if possible, make them laugh. This is not meant to insult or mock anyone in particular. I got some of the quotes from the internet, so I’ll link the sites. I’m also not against Xmas and I think we should spread the love, not hate. Also, not all of these quotes are necessarily lame.  Unicorns! 🦄

“Hey December, you’re the last one, so b the best one”

“Christmas is not as much about opening our presents as opening our hearts.” —  J.L.W. Brooks

“It’s the most stressful time of the year”

I’ve learned that you can tell a lot about a person by the way he handles these three things: a rainy day, lost luggage, and tangled Christmas tree lights. —  Maya Angelou

“Santa Claus has the right idea. Visit people only once a year.” – Victor Borge

“I haven’t taken my Christmas lights down. They look so nice on the pumpkin.” – Winston Spear

“Last year I asked Santa for the sexiest person ever. I woke up in a box” 😜

“I’ll be waiting under the mistletoe when you start feeling desperate!” —  Scott Lang to Hope Van Dyne.
If I ain’t drunk, then it ain’t Christmas —  Corey Taylor
“Santa got arrested for calling a woman a HO 3 times”

I took the quotes from these places:

I had a lot of fun finding these quotes, the first time I googled them I kinda lost hope cause most of them were like “all I want for xmas is you” and that’s SO cheap to say now!! But I found pretty cheasey ones!

Did you know any of these quotes? Did you like them? Did you not? Which was your fave? What other quotes do you know? Tell meeeeeeeee

I hope you liked this post as much as I liked making it!!! This was fun! I hope you all have an amazing day/night, an amazing week and an amazing Christmas!!! I’ll see you next time!