I hope you’re having a great day!! So I almost forgot, but some days ago me and my friend went to the movies together and I remembered: dude, I can do a review! So that’s what we’re doing today!

So surprisingly, I actually had watched the first movie. WOW! I know, unbelievable, right? Anyway, I don’t remember much, I just know he almost effed things up and at first didn’t like his game or something. That’s it.

I’m gonna make A LOT of spoilers, lots of them, I’m basically gonna tell you EVERYTHING. This movie’s plot is a little hard to explain for me, as I’m not good at explaining things without ruining them, I’mma make spoilers. Sorry. Don’t read this if you wanna watch the movie sometime.

Ok so Vanellope loved her game, but she was a little bored cause she played so many times that everything in the game became predictable, and that was something she didn’t like. She began to get bored. She wanted new challenges.

Ralph had the wonderful idea *no* of making a new road in the game, which made her eff up and lose her competition. The girl who was playing the game in real life wanted to go through the normal path, but Vanellope didn’t, so the steering wheel broke.

The owner of the gaming place couldn’t afford buying a new one on Ebay cause no one really played the game, it was rather old, and buying it would cost more than what he earned from it during the year, I believe he said? Not sure, but something like that.

So yeah, the dude unplugged the game and everyone had to run not to get deleted.

No one was allowed to go in there, but Ralph and Vanellope wanted to buy that steering wheel too bad, so they wen’t in. They went to Ebay, of course.

So they didn’t have money, but they found out they could get money steeling a car from a game, so they tried that. Then, when they were racing with the peeps they stole the car from, Vanellope had a lot of fun. *remember this part* So they couldn’t steal it in the end, so Ralph tried to go viral on Instagram, and he made it!!!

They got lots of likes!

But Vanellope was so into that game she had played, she decided to stay in there, so she and Ralph got in an argument and blah blah… Then, Ralph decided it would be a great idea to hack the game she was in to get her out of there. But he almost killed her, cause the hack detected weird things in the game, they were called insecurities *remember this too*.

Then the hack extended to the whole internet and it turned into countless Ralph clones that wanted to kidnap Vanellope, cause his insecurity was replicated by the hack. Ralph got over his insecurity and fought his clones. The internet was safe again.

But they lost their time and couldn’t get to pay for the steering wheel, cause it gave them a payment deadline or something.

Anyway, Vanellope stayed in that game she loved so much and she and Ralph lived really far away, they still video chatted and visited each other, but not as often. Freaking sad, dude.

I really liked the movie. I got sad that her game was destroyed because even if it made her bored, it was her life ad her home, and all of that was over forever.  I was happy that she found another game she felt passion for, but it was really sad she it had to be far away from her best friend, right?

In my opinion, the fact that the game went to hell was Ralphs fault for wanting to make the game interesting. And it was also Vanellope’s fault that she ran away to the game and then they effed up the deadline, THEY HAD THE MONEY!!!!

I mean, you have the money and after all you’ve done, you do nothing?! Really? I would’ve been grateful and saved the game for everyone, she was not the only one who lost it, right? She could’ve saved it in case she ever wants to go back, or just get her memories and old home back. I found that dissapointing.

My favorite character is this one, it’s name is Gord, it’s super cute: 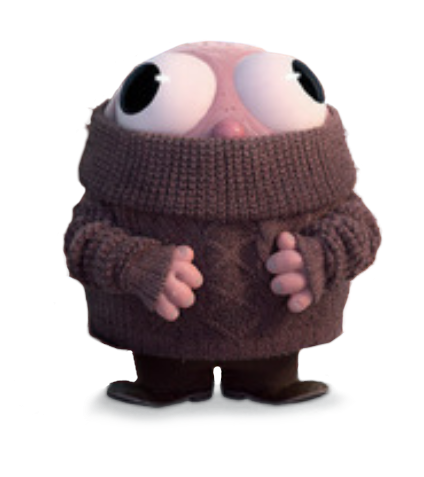 I also like that in the movie there were a lot of references to memes, internet trends… I think I’ll give it 4 stars.

I hope you liked this post as much as I liked making it! I hope I didn’t spoil it too much for you. I hope you have a great day/night and a great week! I’ll see you next time guysssss!!!!!