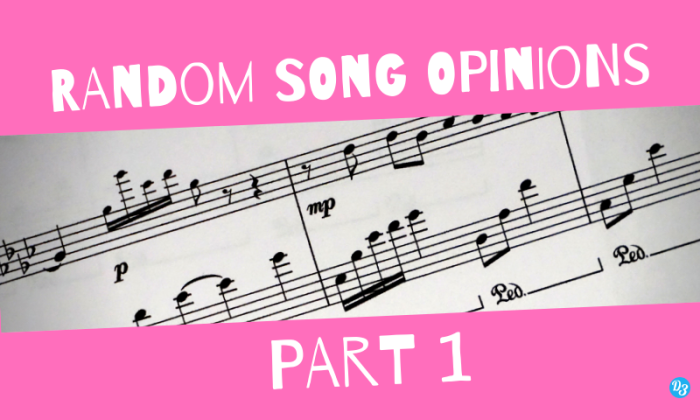 I hope you’re all having a great day! Me, today I’m good, although yesterday at night I threw up 7 times, what? Yeah, I probably had an upset stomach. Argh, it was awful, dude

Anyway, today I’m starting a new series called Random Song Opinions. I know, what’s that? Basically I asked you guys on instagram to send me songs through a story.

Here’s a pic in case you don’t know what I’m talking about: 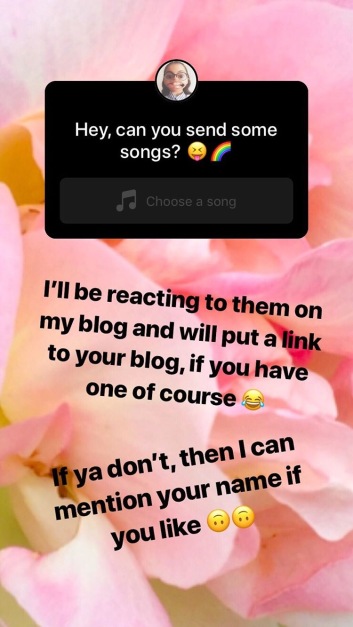 Ok so yeah, you guys sent me some songs and I’ll be quickly reacting/giving my opinion on them as if it were an instagram story. Are we ready?

*and yeah, I wrote #1 because this is a series, there’ll be more*

She sent me the song Golden Hour by Kacey Musgraves

I think it’s good, I’m just more into songs that have more of a dancing rythm, you know? It’s calm, which would work really well if you want to relax or study or something. 🙃🙃

She sent me Vendetta by Chelsea Collins

I really like this song! I like the rythm and how she sings!!! Also I’m really into the word ‘vendetta’, it sounds really cool!!!! 😍

She also sent me New Man by Ed Sheeran

It’s weird because I don’t think I’ve heard this song before. I like it! I really like the chorus and the nanana thing, it’s really cool! 😝

She sent me I Don’t Think About You by HRVY

Omg this guy sings very well! 😍 I would like it more if the beat wasn’t just accoustic and if they added some beat or you know, some drums or something. Well, I also wouldn’t mind having that guy singing a capella. 😅😅

Yasssss I really like rap songs! Also, the beat they have is kind of like the beat they do in scary movies, I’m really into that! So epic!!!! 😝😝😝

Love how this woman sings! Also, again, love the beat!!! Like seriosuly, it’s so different and cool!!!!!

She sent me Car Radio by Twenty One Pilots

This song rings a bell, but I have never listened to the whole thing. I love Twenty One Pilots!!! I love their lyrics and their music and all, argh!!!! I love this!!!! 😍

She sent me Mañana no hay clase by DJ Waz

Dude, y’all probably think I’m kidding, but I do like this song. Honestly, I could be listening to it for the entire day! 😂😂😂 The beat is dope, everyone has to admit it 😂

She sent me Grace by Lewis Capaldi

I love Lewis Capaldi!!! He sings amazingly, honestly! 😍😍 I love the melody of his singing in the song!!! Argh I really like it!!!!!!!!! This song is so cool I don’t know how I hadn’t heard it before!

She sent me If We Have Each Other by Alec Benjamin

I love Alec Benjamin!!! Love his singing!!!! 😍 I’ve heard this song before and I didn’t know it was his, this makes me happy!!!! Argh, he’s amazing! Also, who doesn’t like the chorus’ message?

Omg these are the songs I usually listen to! I had never heard this song, but I really like it, I listen to very similar ones!!! Omg this is going on ma playlist!!! 😝😝

World at Our Feet by Timmy Trumpet

Omg I’m super obsessed with Timmy Trumpet, how is it possible I’ve never hear this song?!?! I really like it! Well, I like every song he makes, actually 😂😂 Argh! I love it! 😝

She sent me Me Too by Meghan Trainor

I like how this guy sings!! I obvs can’t opine on the lyrics as I don’t understand a thing, but it sounds like it’s a love song. I mean, most songs talk about love 😅😅 I like it, this would also work really well if you’re studying or relaxing 😊

Have you heard any of these songs? Do you like them? What are your thoughs on them? Do you listen to music when you study or try to relax? Which singers/Djs are you into? Tell meeeeeeeeeeeeeeeeeeeeee

I hope you liked this post as much as I liked making it! Part 2 of this series will come soon, yaaaay! Stay tuned! I also hope you have an amazing day/night and rest of the week!