I hope you’re all having a great day! You know the girl in the picture? Yep, that’s me. I don’t know when the last time I was in the featured image was. Long ago, for sure.

I have ranted about my opinion on certain social media stuff, but nothing was as particular as this is gonna be. Because everybody has seen story chains on Instagram stories, right?

And there’s a lot to talk about when it comes to them!

I’m not talking about anyone in particular, at last I’m not mentioning them on this post. All the examples shown are made by myself, so I didn’t take the pics from anyone else’s account. I don’t mean to offend anyone with this post.

Ok so I did some examples of story chains I’ve seen and I’m gonna comment on them, are ya ready? Of course you are, you’re just gonna read something. 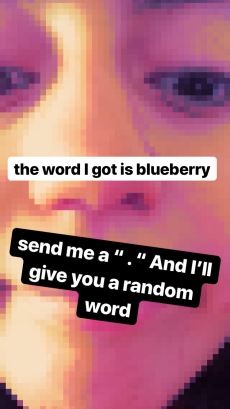 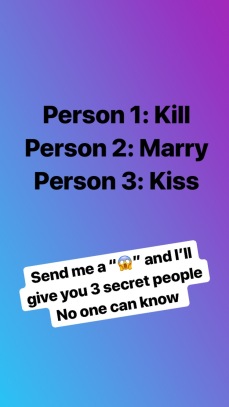 Ok so the first one is pretty wimpy, but it was just an example. You know, people give you a word or an adjective or whatever if you text them, all people want is people giving them the word. I  think it’s pretty stupid, but if that makes people happy, then it’s all good.

The second one you’ve probably seen many times, at least I have. Someone gives you a certain amount of people and you have to play kill marry kiss or rate them from best to worst or say who’s better, who’s worse… You know. I’ve seen some people share their names publicly and others just keep it as a secret.

The third one is basically the same one as the first, but it’s only with emojis. Basically they describe you in one emoji, which is a gar thing to do… unless you have a crush on them?

Argh, I just find that a waste of time. 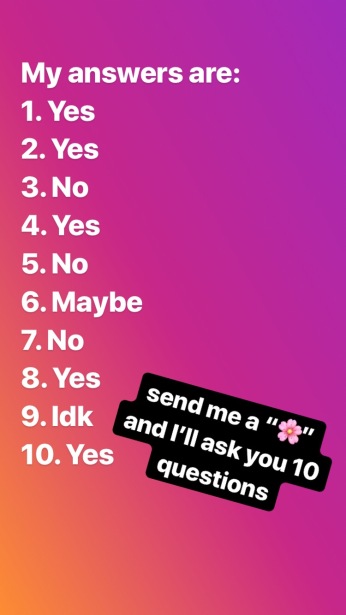 In this one you basically answer to questions no one knows except for the one who sent them to you and you. This is just to make everyone wonder what they asked you, are you kidding?

What is this for? For people to ask you what you were asked? So you get some questions and them feel great cause you think people care about the questions and your answers? Why?

This one is about rating friends, as you could read, this one is always with a number, I guess no one would be so stupid to rate them sharing their names, you wanna get enemies?

I hope you liked this post as I liked making it! I’ll make a part 2 soon because there’re many ones I wanna talk about! I hope you have a great day/night and a great week!