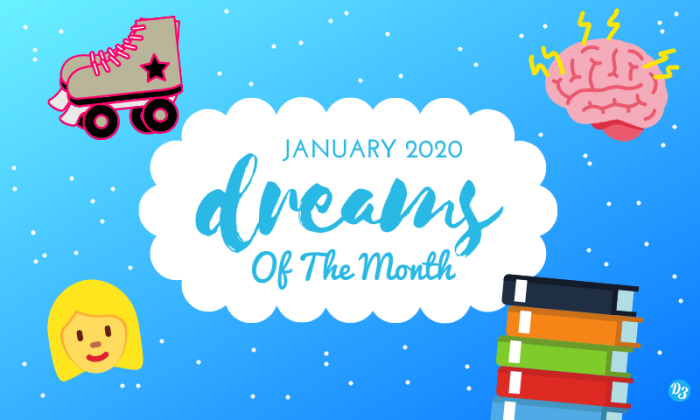 I hope you’re all having a great day!!! I am! Today it’s time for another dreams of the month post! I can’t believe the first year of the month is already over, time freaking flies…

As always, I’m writing 4 of the dreams I had this month which I posted on my dream journal.

Btw did I tell you I’ve finished my dream journal? Now I’m writing on a new one, I can’t believe I just filled an entire notebook with dreams I’ve had in the past 2 years, it’s crazy!!!

I dreamed I was in ICT class *which I haven’t taken this year* and the teacher hadn’t come that day. There was a teacher with us, but we were just doing whatever. One of my friends asked another classmate to cover him cause he wanted to copy some homework cause he hadn’t done it apparently.

He shouted it at loud, like what? I mean, the teacher could hear you, what the hell? Also, why do you need someone to cover you, if you hadn’t shouted, no one would’ve freaking known. Are you stupid?

I dreamed my philosophy teacher organized a trip to I have no idea where, but it was like an hour away from the school by bus. He told each of us where to sit on the bus and luckily the most handsome guy in the class sat next to me 😏 Nothing happened tho 😂😭

So when we were going there, the teacher told the bus driver the stops he had to make on our way back. He asked: “Who has to stop in *insert my town name here*?” And me and other 5 peeps put our hands up. He told the driver, I’m gonna use example names: “Dave, Greg, Mike and Ana Regina, who has dyed blonde hair”

Ok so 1) My hair is brown and 2) it’s not dyed 😂😂 I mean, does that guy need glasses? Or was it just a super random joke? Even the handsome guy looked at me like: What’s this guy saying? Where does he see you’re blonde?

I dreamed I was in spanish class and we were doing syntactic analysis. The teacher called the same handsome guy fro the other dream *argh now you’re gonna think I’m obsessed with him 😂* to go to the board and he said *wait for it*: “Oof, I should’ve put on some pants with a zipper today.”

Yeah, he didn’t have a zipper you know where. But you couldn’t see anything so he didn’t have to worry 😅😅 Sometimes I wonder if people have dreams like this. Why do I dream this stuff? I mean, a dream about a handsome guy whose underwear we can see around that area? Hate myself.

He was analyzing the sentence, guess what he did, I’mma show ya:

I mean, the freaking direct object inside of the “l”, I mean, he’s just as stupid as he’s handsome 😂 Again, how do I dream these things?

It wasn’t that sentence, it was obvs in spanish and it didn’t say that, I have no idea what the sentence said, I don’t remember. Also, in my school we don’t write like this, we write with separate letters, you know, like letters on the computer, but for some reason the handwriting in the dream looked like that.

I was leaving the house to rollerskate for a while, but it was really dark outside, let’s say it was 10-11 pm, it was pretty late to go out on my own rollerblading, cause in real life I’m not so brave.

I wanted to pee really badly, and I was literally still next to my building, so I went in to pee and then go out again.

Then the alarm woke me up. Guess what, I had to pee irl too.

Tell me the truth, do you have dreams as random and stupid as these? This month has been one of the weirdest, to be honest 😂 Do you have a dream journal? Do you remember dreams often? Do you know where the direct object goes? Tell meeeee

I hope you liked this post as much as I liked making it!! Stay tuned for next week’s post, it’s gonna be weird and educational lol. I hope you have an amazing day/night and week!!