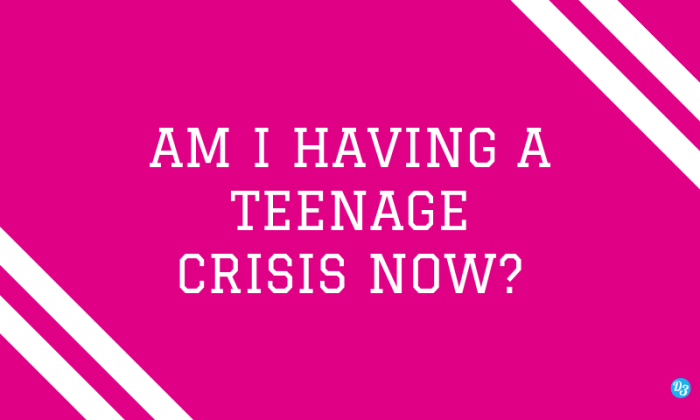 I hope you’re having a great day! I am! Today I wanted to talk about something a little deeper, cause why not? We’re talking about the so called teenage crisis, let’s do it!

Btw omg I’m so sorry it’s been more than a week since my last post, I was so idiotized with my podcast and also stressed with school that I didn’t remember to post on sunday, I’m sorry. It won’t happen again, I promise 🙂 This has not happened in 6 years lol *cause last time something like this happened it was in 2014 around this time of the year lmao*

I was checking older posts and I made one talking about this when I was 14 or something, here’s the link.

So I don’t think I had a teenage crisis then, but maybe I do now.

Why do I think I have a crisis?

Some years ago I thought some people have teenage crisis and some don’t. Maybe there’s people who don’t, but I think it might be really rare. Too rare.

And that was it! Was it a lame ending? I know.

I hope you liked this post as much as I liked making it! I’ll never be so deep in a post, just kidding! I also hope you have an amazing day/night and an amazing rest of the week!

14 thoughts on “Am I Having a Teenage Crisis?”