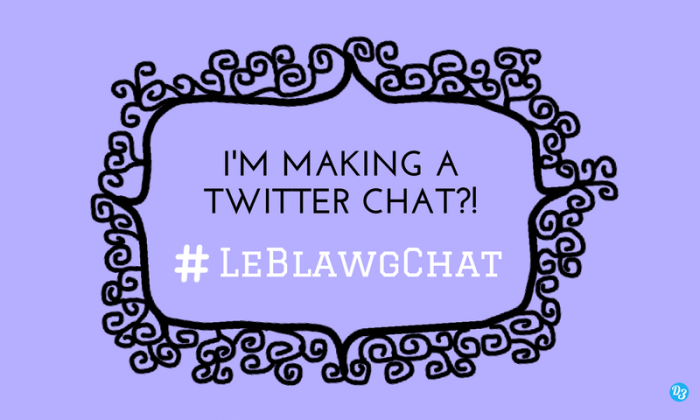 Are you having a good day? I am! So apart from the fact that school starts tomorrow, I have very exciting news *at least to me* that you probably already know by the title…

Yas guys, I am hosting a Twitter chat, it’s called #LeBlawgChat I actually had been thinking of this for a while until few weeks ago I was like: Well, the year is gonna start, maybe I could try making dat twitter chat I was thinking about 😄

I follow some twitter accounts that host twitter chats and they do it once or sometimes twice a week, but I knew that with school coming and then exam season, I would have a lot of time, so I decided to make it once every month.

I also asked on twitter what days I should make it and also the time, and got some help by the amazing Sumedha!

Hey! I have plans of creating a twitter blog chat which would start this month and I’m wondering which day of the week would be best for you guys. 😊🦄#blog #chat #twitterchat

Also, when more or less should I make them? 🙃

And luckily it turned out just the way I wanted it, I also wanted the chat to be on Fridays, because those are the days I have more time, at the beginning of the month *don’t really know why* and at 7:00 pm GMT!!! 😝😝

Also, if ever I couldn’t host the chat either because the Star Wars empire required my lightsaber skills for a battle or because I were too busy with school, I’ll ask if someone would like to guest host!!

So this is the logo and the dates!

So yeah, as the first Friday of the month just passed and I wasn’t gonna do it that day cause things weren’t ready, I’m making the first one on Friday 12th, January at 7:00 pm GMT!

Aaaand I think that’s all I have to say, if there’s any news, I’ll tell you.

I HOPE YOU GUYS CAN JOIN ME!

Thank you to the ones who voted on the polls, it helped me! I hope we have fun, I hope this thing works because I’m kind of nervous 😅😅

If you have any questions, lemme know! I will also be letting you know of new things about the chat on twitter.

I hope you liked this post even if it wasn’t a content one, but the Golden Globes are happening and you know what that means!! I hope you have an awesome day/night and week!