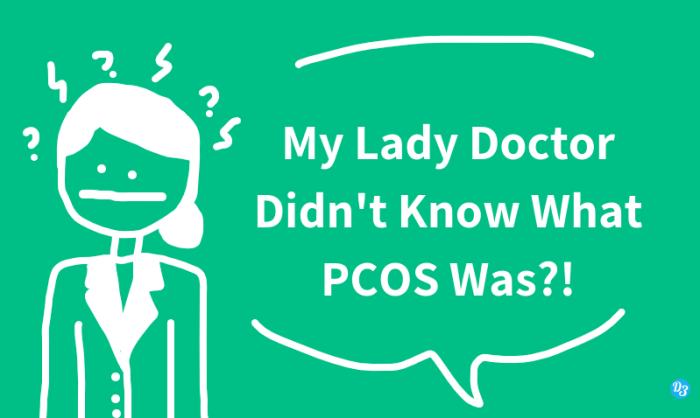 I hope you’re all having a great day!! You know, today I decided it was time to talk about PCOS again because it’s PCOS awareness month and I think I should post more on the topic.

I’m not mentioning that woman’s name nor what I’m gonna is personal, I just wanna tell you what happened and what she told me to make people know that PCOS is something even some doctors aren’t really familiar with.

My Lady Doctor Didn’t Know What PCOS Was?

Ok so the time I went to the Lady Doctor to get an ultrasound and the diagnosis was pretty weird, I’ll tell you more about how it went and everything, but now I’mma go into this.

So she saw that I had no cysts in my ovaries with the ultrasound, so she told us to leave the room for couple minutes cause she had to call another hospital, what? 😱

Why would she do that? Send me to another hospital? That makes no sense!!

Then they called us again after a pretty long time and she said that my diagnosis was PCOS (Polycystic Ovarian Syndrome) but she said it wasn’t exactly that, she said she would call it “lazy ovaries” because the ovaries were like not producing hormones how they should, and also cause I didn’t have cysts.

So I’m not a scientist nor a politician asdlvlbfjkñ, but I think if the “S” means it’s only the symptoms, that just explains everything, it explains how it’s just a hormone imbalance produced by the ovary, the name already says you don’t have cysts.

She must think PCOS is the disease and she may also think PCOS and PCOD are the same thing, THEY’RE NOT, WOMAN!!! 😤

And also, if you do someone an ultrasound, you don’t see the cysts and know they have symptoms, I don’t think she would’ve needed to call another hospital, cause I think that’s enough to get it, right?

But maybe she was like: Oh, she doesn’t have cysts, so she should be fine. But she has symptoms? What?! This is impossible! Maybe she has like ghost cysts. *scared look* I think I should call another hospital and see what they say. *nerdy look* 🤔

Thank god she called them, she would’ve diagnosed me with ghost cysts, or stupid ovary syndrome, or ovarian lice, or god know what else. 😂😂

And yeah that’s all, we basically went home and that’s it, she sent me treatment and shtuff, blah blah blah…

Did you know what PCOS was? Have you ever heard of it? Do you anyone who has it? Do YOU have it? Is your lady doctor like mine and didn’t know crap? Telllll meeeee yo life!!!!!!

I hope you enjoyed this post as much as I enjoyed making it!! I’ll make a Summer Bucket List Tomorrow! I hope you have a great day/night and a great rest of the week!!!

5 thoughts on “My Lady Doctor Didn’t Know What PCOS Was?!”